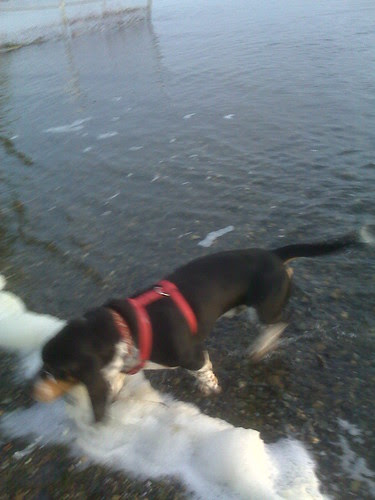 I have been visiting the dog park a few mornings a week. Its a nice dog park, with a dog leg that leads to the water.

I usually am a good boy and listen and sometimes even come back when called.

Recently, I have not been such a good boy.

This means that I have to do the perp walk out of the park ON MY PINK LEASH.

How embarrassing is that?

Tomorrow morning, n.mom promised me the park! I am so excited. Everyone loves me there except for one grumpy fellow, but his mom keeps him away from me.

Do you love the dog park too?

ernest in the water for the first time
Posted by Nazila Merati at 10:10 PM 7 comments: 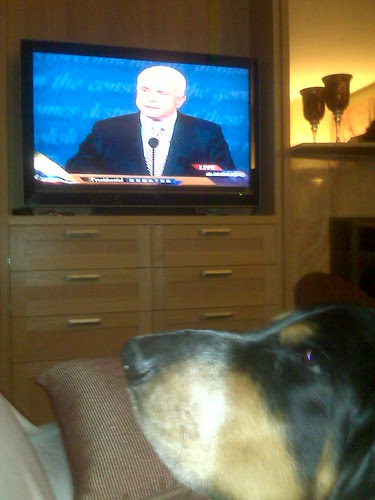 I was not invited.

I will make this statement.

I, Ernest puppy, candidate in the 2008 U.S. Presidential Election, throw all my support to Barak Obama and Joseph Biden.

Now, go on and vote for them dammit.

Or I'll jump on you.

ernest blue to the core
Posted by Nazila Merati at 8:19 PM 3 comments: 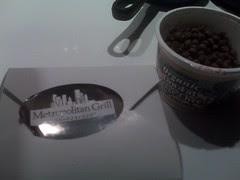 My car is fixed. I am now safe to drive in the basset not so furry mobile! Yeah mom. I'm sorry it was so expensive, but I think I'm worth it.

TH mom is soo close to Sophie, but can't get to her. She better bring me back something really good from CANADA!

My uncle Al took everyone out for dinner tonight. Nmom and GP were nice enough to leave me some filetmignonables. Yum.

Thanks for going with medium, the rare stuff is hard on my tummy.

They always talk about the white box around here. My predecessor, Jacques was famous for getting really good white boxes. This is my first real white box and it was delicious. Tomorrow for breakfast I am having mignonables mixed in with my squashables.

TH mom purports to be coming back on Saturday night, Nmom wants to do a 20 mile walk. That seems long to me, I guess TH mom is stuck with me for at least six hours. I guess we're going to have to work on bell ringing and outdoor chewing.

over and out ernest the puppy
Posted by Nazila Merati at 9:25 PM 4 comments: 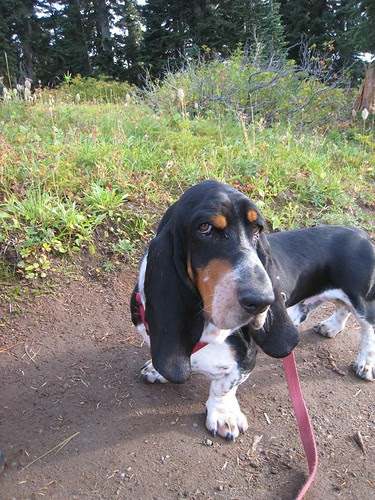 Nmom put me in the kennel in the better basset mobile, we went to the dog park where I made sure that other dogs got some exercise and then we went home.

She went to pop the tail gate and it wouldn't open.

Did she mention this car has no interior handle?

Did I mention that I was freaking out?

Did she mention that she was freaking out?

So, she pulled the kennel forward and then opened the door and then moved it over and I popped out the side door.

Did she mention that the garage needs to take the whole panel off the tailgate at 98 dollars a hour and then fix it and it will easily cost 500 dollars?

Did she mention that she wanted to tell them to screw off? (Naughty mom)

Did she mention that if it had been hot and there had been no way of getting the kennel out of the car I would be really scared and overheated or even worse?

So, I'm out on my couch and my tummy is full of squashables, a bit of kibble and some biscuits. Nmom went to grand mere's and grand pere's and mom climbed into the back of the wagon and collapsed the wire crate with the help of GP and now I get to ride in GP's jeep for the rest of the week?

Did she mention that GM was not amused by this thought?

Anyways, all is well that ends well. Nmom is relieved that I am okay and that the kennel is out. She wouldn't want the Volvo technician to charge her 98 bucks just to get the kennel out of the car.

Whew, that was long.

I'll be back to regular blogging. My mom is feeling better after walking 60 miles a few weeks ago and my TH mom should be back from CANADA soonest.

ernest puppy lock down or bust
Posted by Nazila Merati at 9:05 AM 5 comments: 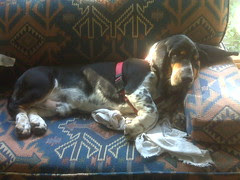 I am home, my moms are too busy to update you on my life.

I miss you all.

My moms are so lame.

ernest basset fit for a king
Posted by Nazila Merati at 9:18 PM 5 comments:

I'm being a pretty good boy. I'm really a bit worried about things in the presidential race, but I'm sure that Ms. Palin will get it good soon. What a nut. Phracey, who continues to amaze me with her hunting skills, her no nonsense approach to life and her ability to stay non-pregnant even with all these amorous advances would have made a much better vice presidential contender. She's completely left of the center, so maybe that wouldn't have worked. I think she outweighs Cindy McCain, so she could have kicked her ass.

Its not like Palin has anything interesting to say.

I do. ALways, apparently I am quite hoarse because I talk to anyone who will listen to me.

My moms are back from Greenland and based on my limited correspondence with them while they were without blackberry coverage, I am purportedly the luckiest basset on the planet because I am tied up to a rock for the summer like the sledge dogs they saw all over middle western Greenland.

I believe they were considering buying all the dogs they met dog beds.

Anyhoo, its about T minus 96 hours before I start ringing my poochie bells in the 98105.

The moms, they really do miss me.