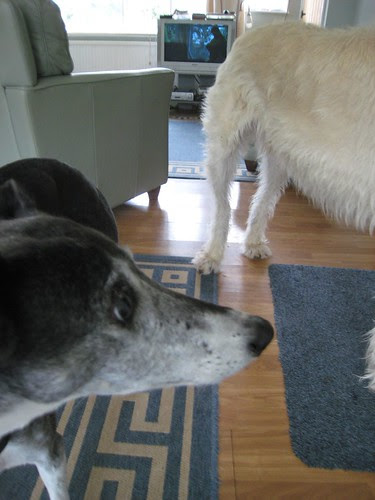 The SUMDs are having some more tears. I am not amused. I will miss the long legged and gentle beauty that was Cleo. I was lucky enough to see her this past September. She was sweet, darling and so calm. Again, my heart goes out to Kerri, Brian, Pat and the SUMDs. I'm sure Meggie and Kubrin are ready to chase you through a field up in heaven.

Honestly, this can stop now.

Today, Ernest and I went to the beach at the dog park. We met a lovely wolfhound/labrador cross named Eddie. Because of the SUMDs and Finest Finnegan, we realized that hounds don't have to have six inches of clearance and long ears to be special. Wolfies, Greyhounds, Deer Hounds and Bloodhounds are also pretty cool and can help the wrinkly dwarf dogs get things off the counter.

N.mom says get your ballots in the mail, Stat.

Thanks to Uncle Diego for sending this to nmom. He thinks Palin is hot, we're taking his ballot away from him.
Posted by Nazila Merati at 9:29 PM 2 comments: 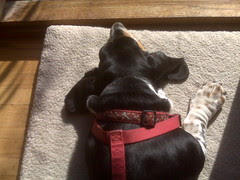 I was let go by my dog walker.

Yup. I did not come back when she called me.

I guess I didn't do the right thing, but my mom's friends all say (or are
trying to make her feel better) and say that most dogs don't come back to someone
the first time they go somewhere with them. Mostly, because I can't even remember what she looked like.

So, we're working on recall now. I am good at it when I am an one on one basset, even at the park or outdoors.

My mom isn't so happy because the dog walker didn't call her until Sunday afternoon to tell her this.

My Tmom says that this weekend we can practice at work on a long leash with lots of biscuits!

Nmom is still going to take me to the park, but is going to be a hard ass about my comings and goings.

My Tmom is coming home!

I like Sophie's idea of hiding her passport, but unfortunately, she doesn't need it to go to her next destination. I am going to hide her driver's license and her car keys. I'm not tall enough to hide her car.

I wonder if she will recognize me?

I wonder if she brought me a present from Iceland?

ernest who is currently reserving all energy for a slobbery basset smooch
Posted by Nazila Merati at 10:43 AM 3 comments: 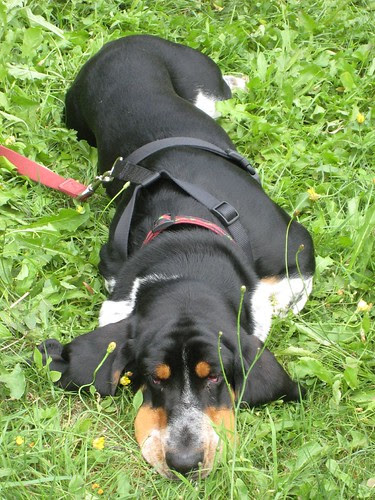 Two more sleeps until my Tmom comes home and takes me for at least two walks before she leaves again.

I am tired. Must have been a wild time at the dog park, nmom didn't get a report. However, I fell asleep after dinner, so I must be tired. Usually, nmom can't even finish her own dinner before I start ring a dinging to go for my fourth walk of the day. 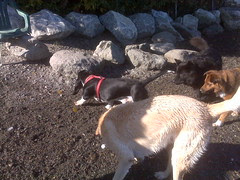 My mom has given up on me, for some reason, she doesn't believe she has the strength or time to take me on three hour long walks daily. Instead of driving me to Nebraska where she was considering abandoning me, she decided to hire a dog walker to take me to the park at lunch time! She also considered sending me to Kerri and Brian's but the fuel surcharges would have killed her.

I get to go the park with my pal Finnegan and have someone else bend to my will.

Nmom is not going to do this very often, but I think it should be fun. Today I went to the park and played with a bunch of other dogs. One beagle something mix jumped up on an overhanging willow branch and jumped in the water. I was jealous because he was brave to go in the water. I just supervised and made sure no one had eaten for 30 minutes before going in the water.

Tmom sent a picture today with lots of snow. It looked not just cold, but grey. I will settle for cold, crisp and blue, thanks.

Well, my dog walker should be here soon to check me out. She already knows me but I'm sure there is some sort of something that needs some sort of legal signature.

This weekend I plan to do some major bone chewing while nmom does some gardening. She said something about bulbs, but I think she really meant bones.

bluer than you would ever know
ernest the puppy
Posted by Nazila Merati at 7:52 PM 4 comments: 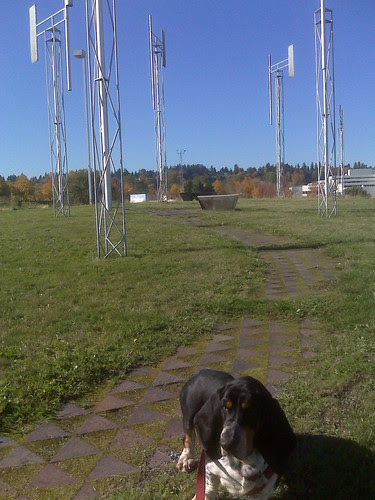 I'm sure Wally and TofuBurger can tell the rest of you where this picture was taken. It was taken at a very well known piece of publicly funded art that is no longer accessible to the public due to the Republicans hating the Democrats or something.

Anyhow, its right by my personal egress to the dog park! The best part of the dog park -- the water! As you know, bassets don't swim but they like to run back and forth the shoreline barking at the dogs who are brave enough to go into the water. I do it when I am allowed and honestly, I think most of the time I am the loudest one there.

Today my mom left me at home and went to dinner with my grand mere, grand pere and Uncle Al. When she returned she brought me some guiltscuits - biscuits purchased out of guilt of leaving me for two hours by myself. She also bought me some foodables as I am nearly out. I hope she remembers to steam some sweet potatables for my breakfast tomorrow.

Tmom says the weather is sucking the big one in Iceland. However, she also said the food was much improved over Greenland and that their sessions go after dinner when people are snozzled. I guess anyone's graphs of the rise and fall of the Greenlandic shrimp production versus solar flares look better after half a bottle of wine.

Well, I need to go chase my tail before bed. 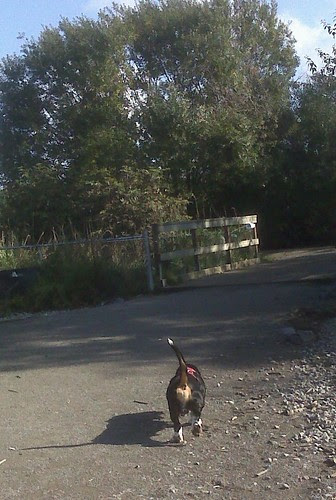 Nmom told me to cool my jets.

Then we went to the park at lunch. It was chock a block full of dogs and I had a blast with all the dogs.

Tomorrow, she promised more of the same!

Tmom - I am sorry its snowing and cold and dark. Its going to be sunny here tomorrow, I wish you were here with us! 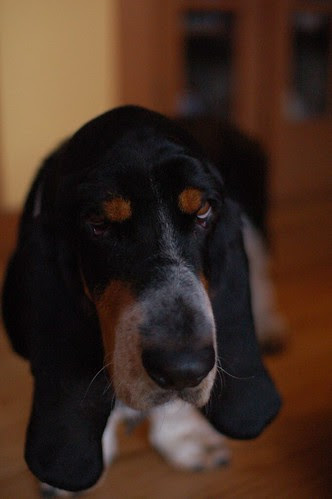 My TH mom is in Iceland again. I have no idea why anyone would want to go there. I guess she's in the process of buying it or something.

Actually, she's there to give a talk about stuff that is not of great interest to bassets.

In any case, my nmom is taking care of me and honestly, not doing a very good job as all will in the 98105 has not been bent to my needs.

Yesterday I took my grandmere to a nursery up in a different area code. It was fun. Today I spent the day at home, but still went on four walks. Its boring now because it gets dark so early, so I am pretty much ready for bed at 7:30 pm. Nmom likes this because she says she can do things without my assistance.

TH mom usually walks me at lunch time and now my nmom has to do this. She finally met the construction worker whose sandwich I try to steal every day. We took my walk too late and he was done with his sandwich. He could have at least left me the crustables.

Tomorrow is supposed to be nice and dry. I hope Nmom takes me for a super long walk in the morning. Maybe even going to the dog park! A guy can only dream.

Speaking of dreaming. I have finally finished all my kibbleables and water and now its time for me to hit the sack for good.

over and out ernest the puppy
Posted by Nazila Merati at 9:13 PM 9 comments: 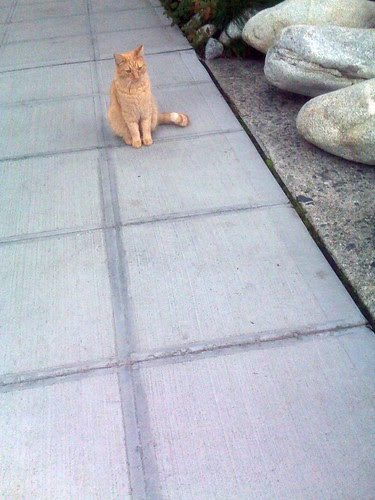 To every path there is an obstacle.

I am feeling a bit better. I have no parasites in my stools (TMI), I am awake and bored and ready to go. I have had approximately 1.5 cups of rice and 2 oz. of chicken in the past 24 hours and I am still hungry.

The nice vet tech said to up my foodables! Woot.

Thank you for all your kind words. I may be nicer to nmom today and not make her sleep with me on the couch.

ernest on the upswing while the stock market is on the downswing
Posted by Nazila Merati at 4:51 PM 5 comments: 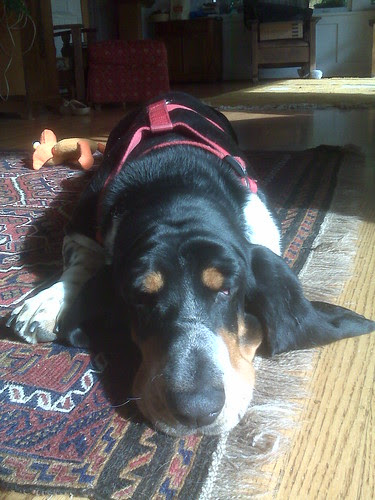 I am not feeling very well. I should say I feel fine, but my stomach isn't handling foodables very well.

The doctor says there is something going around or that I had a little too much roast beef on Sunday.

I am still active.

I am still happy, but I am hungry.

I lost .2 lbs since last week.

I am being given 1/2 cup rice every four to six hours plus a little chicken broth and chicken breast meat. If I don't get better by tomorrow, they are going to try something else. Nmom has to go out now and buy me some pepcid-ac.

Please send biscuits to the 98105 if you have some to spare. 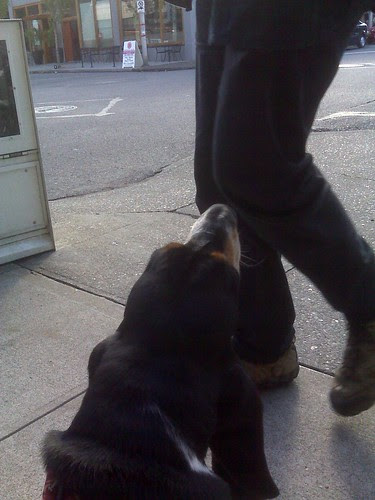 Sorry I have been so absent. In the last two weeks I have been good, been bad, had a bit of a wonky stomach, hung out with my friends at the dog park, gone on a road trip to Portland, attended my first marathon and participated at mile 7, 11 and 21!

My best friend Scruffy, the Idaho Potato Terrier came over and we played hard yesterday.

I am also trying to keep my moms calm (well, really n.mom) in these turbulent times. She said something about IRAs, scum derivatives, investment bankers and retirement. She hasn't looked so hot the last few days.

So, other than that, we're just keeping cool here.

I am hoping my tummy calms down so that I can eat real food again.

edd up 938 points and derivative free
Posted by Nazila Merati at 6:36 PM 2 comments: